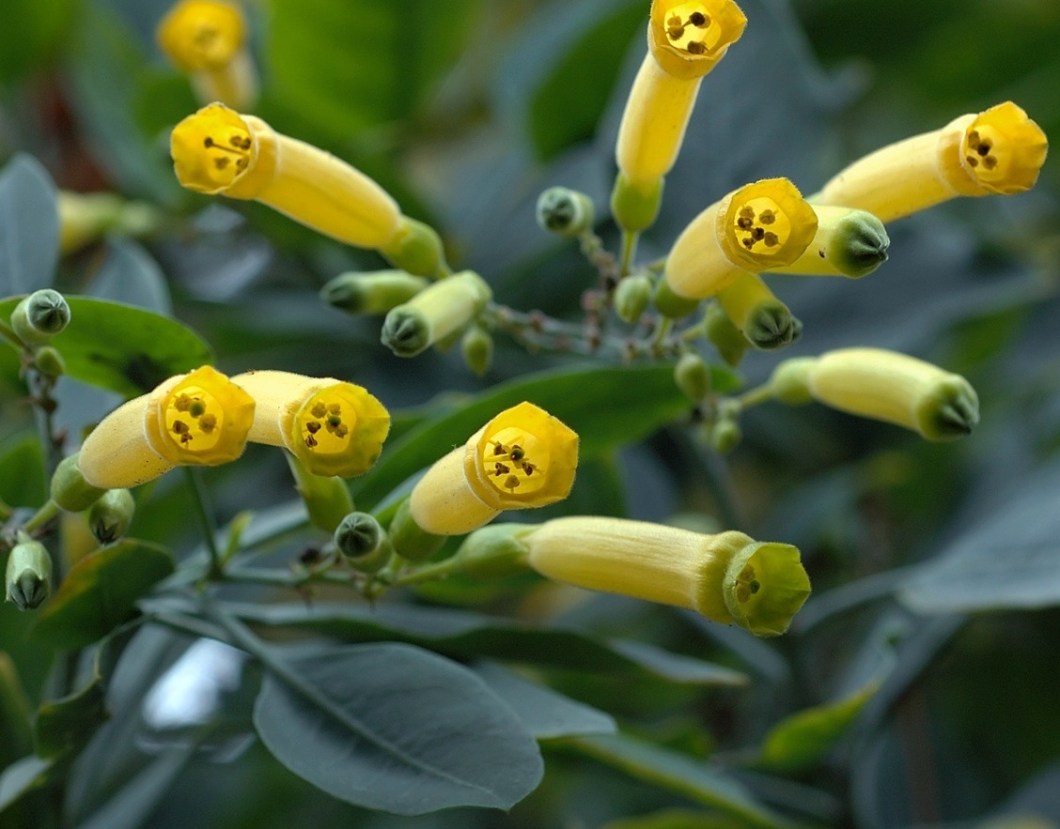 It started with a sprout. A very healthy sprout. It shot up alongside the garden gate, growing what seemed like inches each day. Its waxy yellow-green oval leaves seemed impossibly lush in the heat of our summer climate, where all around it the dried out husks of foxtail grasses and scrub brush rustled aridly in the wind. It crowded out anthing else that dared grow in the vicinity. It was so healthy, so just plain vigorous, that I decided to let our little prodigy grow- in the hopes of finding out what it could be…

And it grew and grew and GREW… I’d never seen anything like it. It seemed like a plant possessed, a real go-getter, if you will. From a small (if energetic) sprout in the early summer, it grew into something much more like a tree by the beginning of fall, towering over the gate and providing an area of unexpected shade and relief from the sun. I bought a bench and placed it underneath, creating a reading area in the new island of cool. Along its long graceful branches blossomed hundreds of small cheery yellow, trumpet-like flowers . If I sat still under it long enough I was surrounded by a stream of hummingbirds, chirping and darting in to take advantage of the flowers.

I was surprised by my (not so little) over-achiever and more than a little mystified. Where did this plant of herculean vigor come from? What leant it the almost bionic skill, the ability to be “better, faster, stronger” than the other plants surrounding it? A fruitless search on the internet was cut short by a discovery outside the realms of “da interwebs”. During a field trip for a Natural Resources class I was taking, the identity of our mystery plant was revealed, and the unveiling wasn’t entirely a pleasant one. Our little guest was technically more of an invader- Nicotiana glauca, otherwise known as tree tobacco. A native to Bolivia and Argentina, this aggressive plant had little to no competition in the area and easily towered over the local shrubs.

According to invasive.org and several other websites, “ Wild tobacco is a highly invasive opportunistic weed, and easily out-competes natural vegetation in regrowth or disturbed areas. It is also thought to be toxic to livestock if eaten in sufficient quantities”. It is a “tall shrub or small tree in the nightshade family (Solanaceae, of family that contains potatoes and tomatoes) with pendulous tubular yellow flowers an inch or more long. The oval leaves are 2 to 8 inches long with a waxy grayish covering. It is a rather weedy plant, yet somewhat attractive, especially to hummingbirds.” The seeds of this plant are eaten and spread long distances by birds.

My shady, graceful, flower covered Tree Tobacco is apparently pure poison. It is on the list of toxic plants in several states, including Texas, California, and North Carolina. To enhance the spiritual experience, tree tobacco is sometimes smoked by California Native Americans in combination with Datura wrightii, which may be dangerous as both plants induce respiratory depression. “Although Nicotiana glauca has been publicized as a safe, hallucinogenic plant on some internet websites, smoking or ingesting the plant has frequently lead to death and parents are encouraged to keep the plant’s leaves and stems out of the reach of their offspring, for fear of accidental death.” Say what?!

In addition to this damning testimony, our professor contributed another volley of condemnation: the plant was one of the worst invasive offenders- extracting water from the soil at a frightening rate and transpiring it away into the atmosphere- effectively desiccating the soil around it while at the same time outcompeting local shrubs and trees and displacing them.

After much reading about invasives, I felt I had as much of a handle on the issue as possible for the moment. Here is the basic argument against invasives, summed up in a few paragraphs:

A healthy ecosystem is composed of a complex set of interdependencies between its members that has developed over time. This set of relationships should be in cyclical flux over time. The introduction of a new invasive species (like my Tree Tobacco) can and will change this set of interdependencies- and affect far more than just a single plant or animal that is “replaced”.

Although not all introduced species have such detrimental effects, many invasives have the potential to do great harm to the local ecosystem into which they are introduced. This can result in the extinction of multiple local plant and animal species. The entire food web along with its members (from bacteria and fungi to arthropods, earthworms, up to birds, mammals and beyond) can be decimated by the introduction of invasive species of plants or animals. (of course, this brings up the issue of many of our agricultural species such as apples, colonial bees, etc, which we will have to deal with at a later time)

With the advent of rapid methods of modern transportation, this introduction is occurring at a much higher pace than in the past, species are now mixing much like a blender set to puree. And this “blender effect” is accelerating. The process of change occurs gradually as a matter of course in nature- but the speed at which the change is being spread is astronomically faster than in the past- not allowing many local ecosystems to adapt to the onslaught of new species. If you want a damning example look at the deadly effect of the Miconia on the forests of Tahiti…

Even in situations where the invasive does not cause a breakdown of the entire local ecosystem it still leaves the system highly vulnerable to a breakdown. As a genetic monoculture spreads over an ever-greater region, wiping out the specifically adapted individual species, the entire ecosystem becomes more vulnerable to an assortment of pathogens that can spread quickly and broadly through the population.

Now the dilemma. Do I heartlessly uproot this interloper? Or would it turn out to have some redeeming qualities? I had watched it grow for an entire summer, nursed it along sometimes, to tell the truth, with extra soaks from the watering can to support its ever-spreading canopy. Now I had to decide if I should tear it from the very ground of my garden and cast it out- a modern day Bible story reenacted.

Further research only muddied the issue… It seems that this noxious, sometimes deadly, aggressive ‘weed’ is also often used in decorative gardening as a way to attract hummingbirds to the garden. In “Hummingbird gardens” by Nancy L. Newfield, it is earmarked as a “very choice” plant species particularly suited for attracting our little darting feathered friends. And there was the delicious shade it had so quickly and temptingly provided in my otherwise searingly arid ‘gardenscape’.

Now that I knew the identity of my uninvited guest, I saw his relatives everywhere. Along the roadsides, in drainage ditches and even dominating a corner of the occasional garden. In our class we had learned how to efficiently uproot these invaders. With saw, root wrench and shovels, we had eagerly applied ourselves to the task- removing dozens of trees from the bottom of a clogged up riverbed near Irvine Ranch.

Finally, it was the very abundance of the plants that decided me. If I could slow the invasive tide and it’s consequences that much more by removing my one tree, then it would be worth it. One morning, with a sad heart and a heavy shovel, I set out to cleanse my garden of this exotic invader. Next year I’ll plant a native shrub in its place… but I have to admit, I’ll miss Nicotiana glauca’s graceful branches and yellow flowers in my garden.