Scoliosis and Your Breathing

Scoliosis and Your Breathing

HOW SCOLIOSIS MESSES WITH YOUR BREATH

I never thought that a breathing class could change my family’s life so much.

Earlier this year, my husband and I flew to New York for a Breathe Teacher Training workshop with Dr. Belisa Vranich. In the class we learned to assess breathing style, measure Vital Lung Capacity and lead people through a series of exercises designed to help them better engage their breathing muscles and dramatically increase their overall health. It was an intense and insanely informative 3 days, and we went home excited to implement what we had learned.

My first subject was my mother. My mom has always been the metaphorical backbone of our family, but in the last several years, her own posture has grown much worse. Working with her, I noticed something interesting.  Every time my mother tried to take a deep breath, her body rotated strongly to the right. Hmmm… that shouldn’t happen.

Looking at her with new eyes, I had a revelation. Scoliosis. I examined her back to make sure… yes, hidden under the layers of bulky sweaters was a very distinct curve. Armed with my new knowledge of breathing mechanics, I quickly realized that her extreme degree of curve was severely inhibiting her ability to breathe. Not good.

The months since then have been a true education. I began a campaign to learn as much as possible about scoliosis to help her out. What I learned bears sharing…

SCOLIOSIS AND YOUR BREATHING MECHANICS

In scoliosis, the spine is abnorm

ally twisted and curved to one side. This is an imbalance that involves all of the stabilization muscles of the trunk. These muscles not only serve as an amazingly elastic webbing of postural support, but also act as key players in the process of breathing. Because of this dual role of the trunk muscles, the breath can be one of the first things affected by a strong scoliotic posture.

For the lungs to have the best breathing efficiency, the ribcage needs the strength and flexibility to expand and contract freely. In later stages of scoliosis (like my mother) the ribcage becomes gradually more asymmetrical and inflexible, with one side splayed open, and the other side of the ribs squeezed close together, interfering with deep inhalation and exhalation. The inflexibility of the ribcage blocks the efforts of host of helpful breathing muscles, leaving the diaphragm muscle to act alone.  This greatly reduces vital lung capacity, leading to an unhealthy pattern of quick, shallow breathing.

Conventional medical treatments for scoliosis often involve either watching the curve with a ‘wait and see’ mentality, using a hard brace that attempts to ‘cast’ the spine in proper alignment, or surgical methods that insert metal rods and bone grafts along the spine to fuse the vertebrae and force them into alignment.  None of these were really options I wanted to put my 80 year old mother through.

THE BREATH AS A TOOL: Rotational Breathing 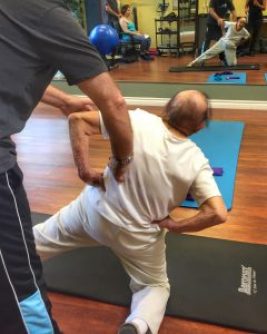 Deeper digging gave me some alternatives. Several well-established schools of physical therapy offer an entirely different approach, using the breath as a tool along with corrective exercises in order to use the body’s own mechanisms to re-align the spine. This was something that my determined little mother could sink her teeth into.

We chose the Schroth method of scoliosis therapy and began working with a great Doctor in Irvine. The Schroth method emphasizes strategic ‘Rotational Breathing’ into the constricted side of the ribcage while doing tailored corrective exercises.

This “rotational breathing” approach has been shown to help de-rotate the spine, strengthen the weakened muscles and lengthen the shortened muscles. This can stabilize or even improve the curve, helping create a more aligned posture and better breathing mechanics than standard treatments.

Mom dove right in with dogged determination. I’m pleased to report that after only a short couple months of hard work, her posture is noticeably straighter and her pain lessened. I have confidence that we are doing the right thing to keep my mom with us for many more happy years.

MY scoliosis is mild, WHY SHOULD I CARE?

Like my mother, you might NOT ‘grow out of it’.  Scoliosis can be a progressive condition and long term effects can prove daunting to those who ignore it. The greater the curve angle, the greater the interference with normal function over time.  The collapse of the abdominal (belly) and thoracic (chest) cavities add ever growing pressure on the internal organs and rob the spine of internal support. This can lead to chronic low back pain and a squeezing of the internal organs, greatly impairing their function and potentially leading to organ failure.

While Schroth Rotational Breathing and corrective exercise take daily dedication and perseverance, they have proven and significant results in the treatment of scoliosis. It kills me that I didn’t notice my mother’s curve until it had progressed to over 110 degrees.  I hope by sharing this, I can help others take action far earlier and avoid pain and degeneration in health.